Who is Where? / Re: Birthday trip to Latvia

Wowser...lucky you bagging a TIPA from Ārpus and an East Coast style as well, I love these creamy looking IPA's, the smoothness that they have combined with a silky mouthfeel and the sweetness to balance the citrus hops 😋

Wauw, what more can I say than that this Latvian beer is such a great masterpiece.
But be aware that this beer has been discontinued. I'm actually quite lucky to have sampled it

That's not a bad price at all mate, I paid around €4.50 - €5.00 for the beers I picked up but seeing as I bought them in Latvia it makes those Belgian prices all the more reasonable (here in the UK they would be around £9...and that is if you can find them)

Also I was told by two separate people on two occasions that Ārpus are notorious for brewing a beer once, they brew a beer then release it into bottles shops and never brew it again...so like you say lucky to sample it.

Last post by Trappist - January 31, 2023, 12:06:58 PM
Hi,
Time for a special beer!
A Belgian beer made with belgian waffles from Liège
Yes, you read that correct folks 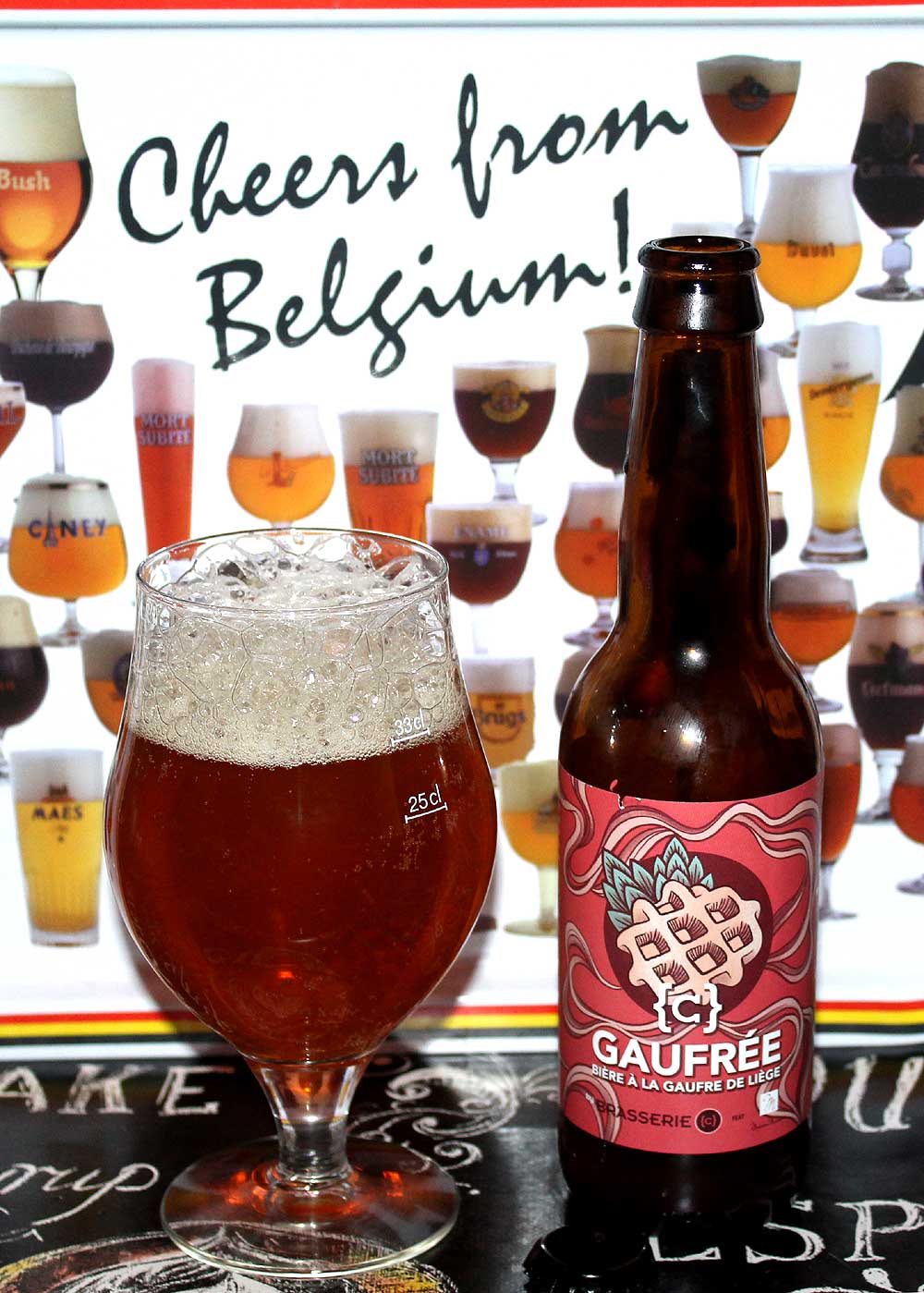 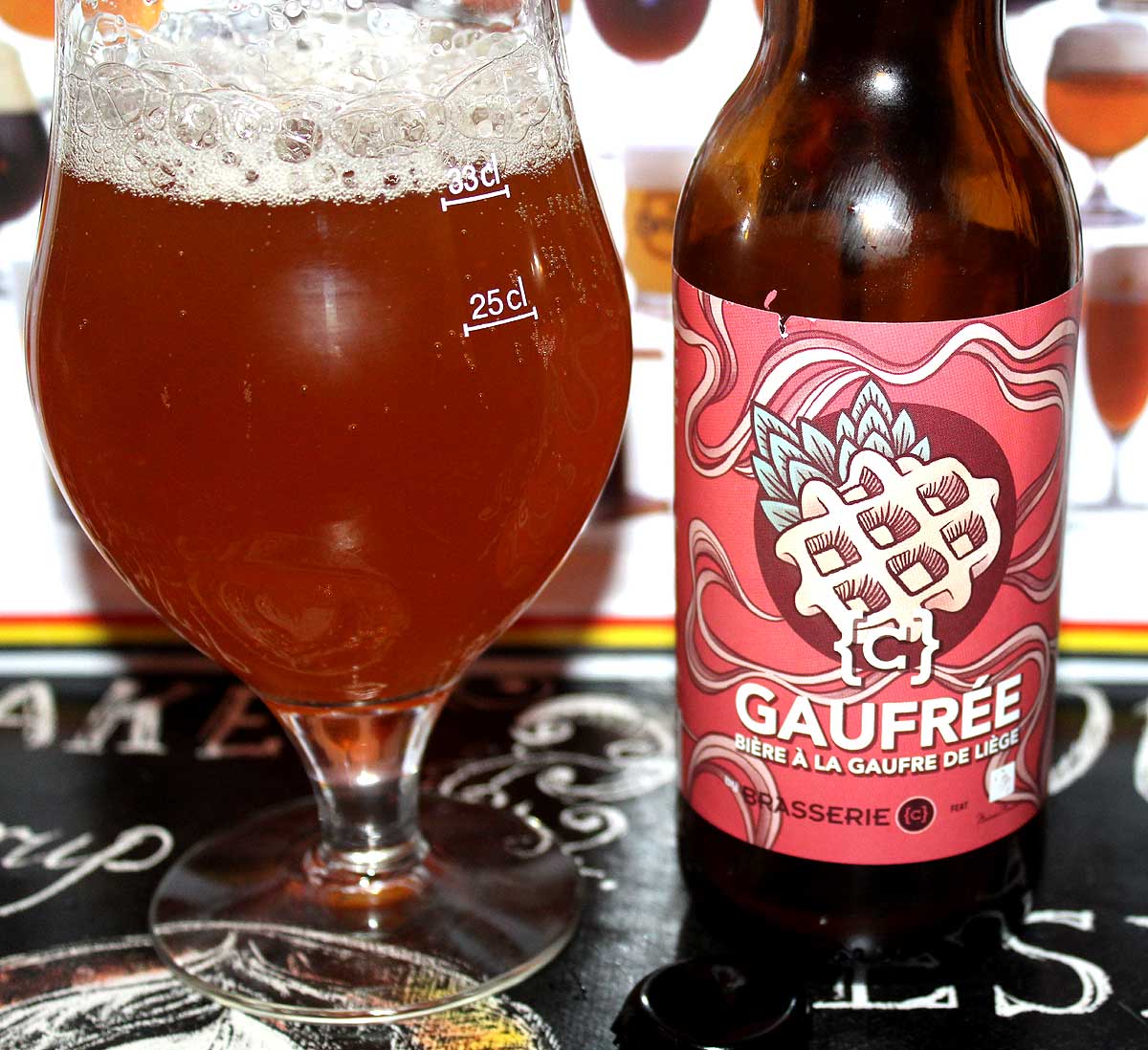 This is already the third edition of this LIÈGE WAFFLE BEER in collaboration with MAISON MASSIN. (https://maison-massin.be)
By adding 1,200 "Liège waffles with cinnamon" to this brew, the brewers let themselves be guided by their gluttony.
With its aromas of cooked dough and spices, this beer is always a real taste pleasure.
7.2 vol%
Brewed at Brasserie {C} - Microbrasserie de la Principeauté (Liège) (https://www.brasseriec.com/)

Holy Jeez, what a freaky cinnamon spicy beer!
Nosing and tasting is reaching cinnamon heaven folks!
It's sweet, it's pastry, it's Liège cinnamon spiced waffles all the way !!!
Adding waffles is also adding some fat, so I'm not really surprised that the foam retention failed completely.
But no worries, it's all about them flavors here.

Well folks, I sure didn't dislike this beer.
It has that nice sweet cinnamon cookie flavors, and still has a nice maltiness about it.
Not really hoppy ofcourse, but the density and mouth feeling were satisfying.
That 7.2 vol% is just that perfect amount IMHO. Stronger would've been a failure.

Anyway, always in for beers like that. Makes Belgian beer tasting that more fun guaranteed.

Who is Where? / Re: Birthday trip to Latvia 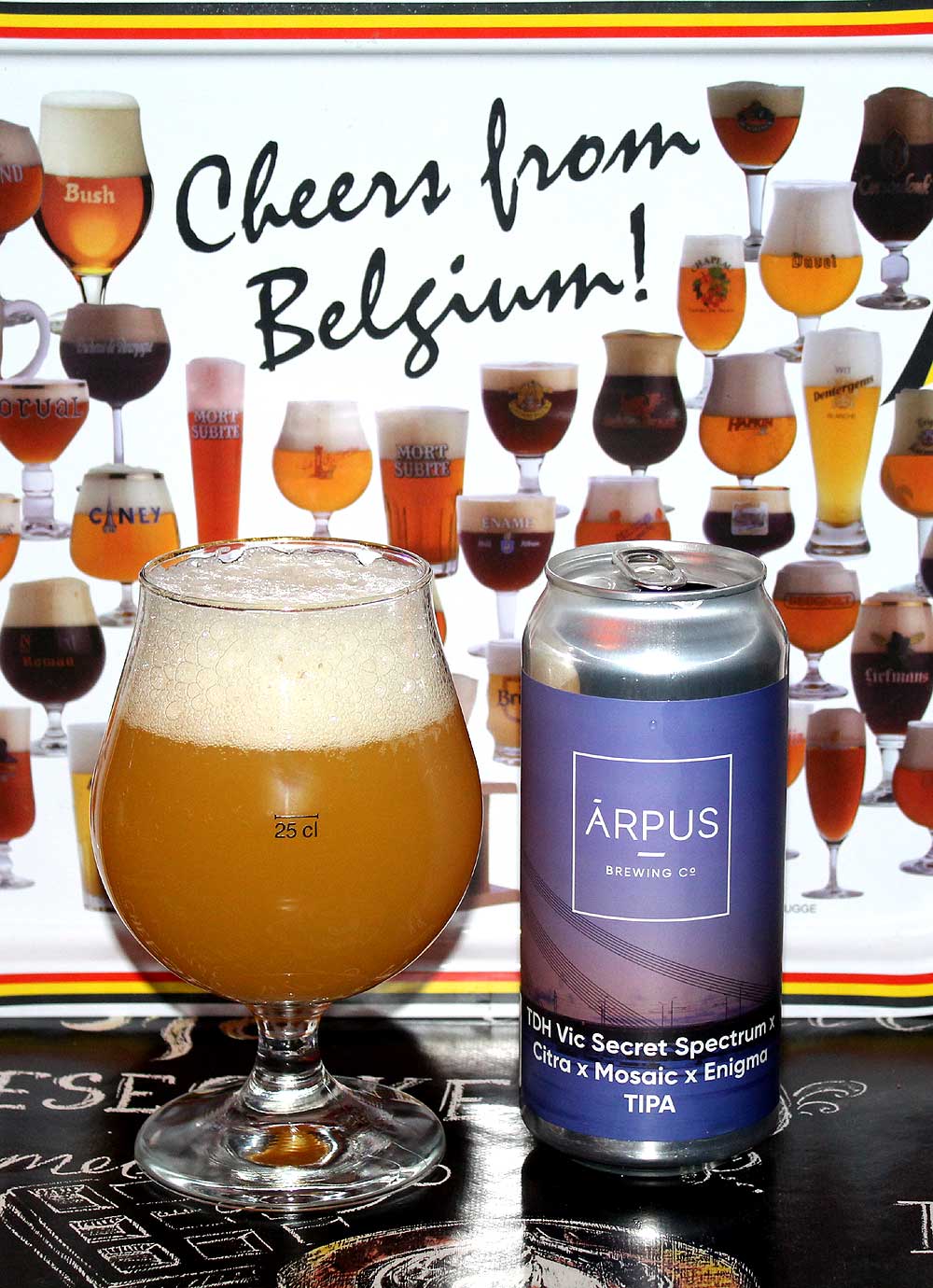 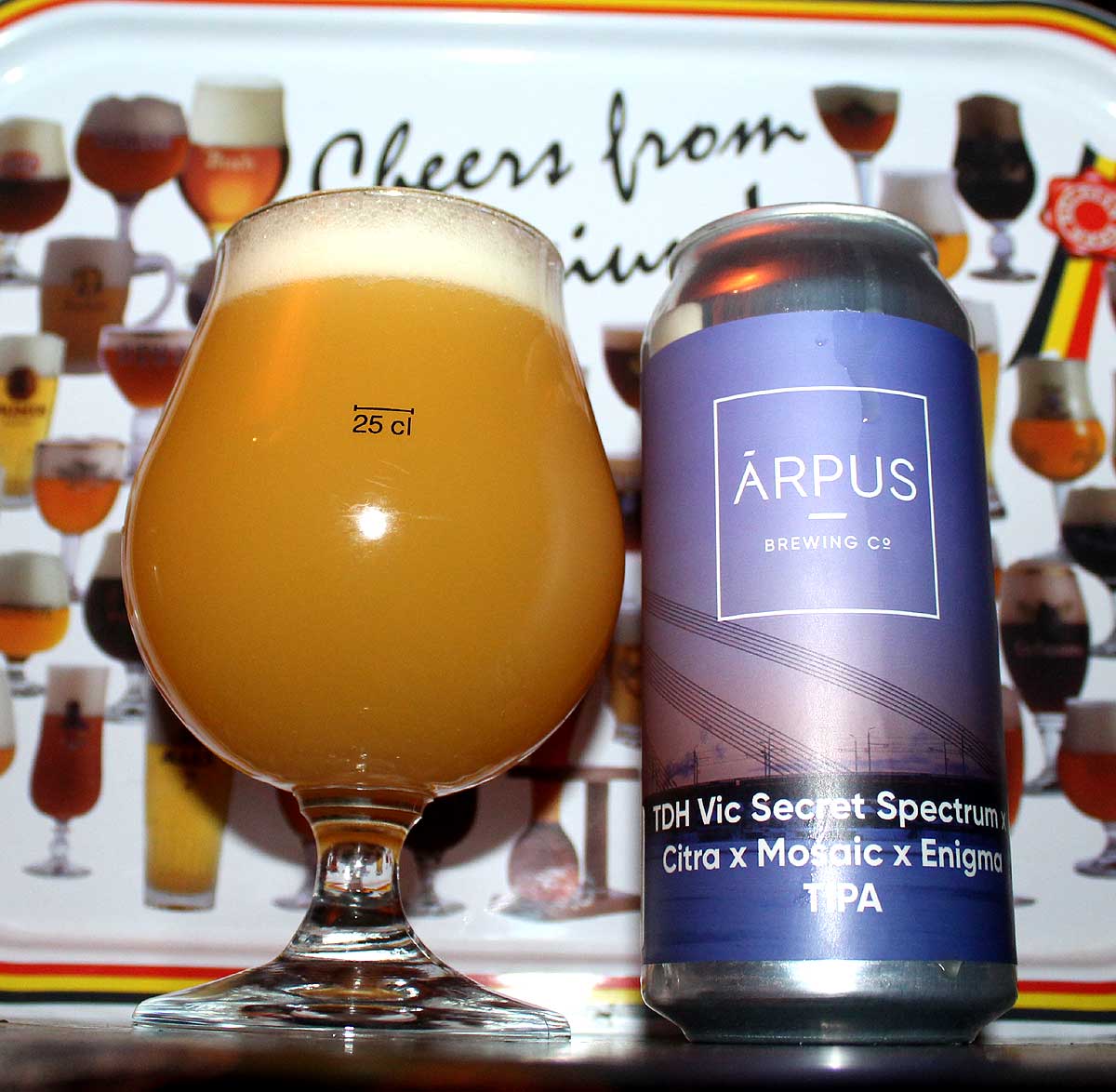 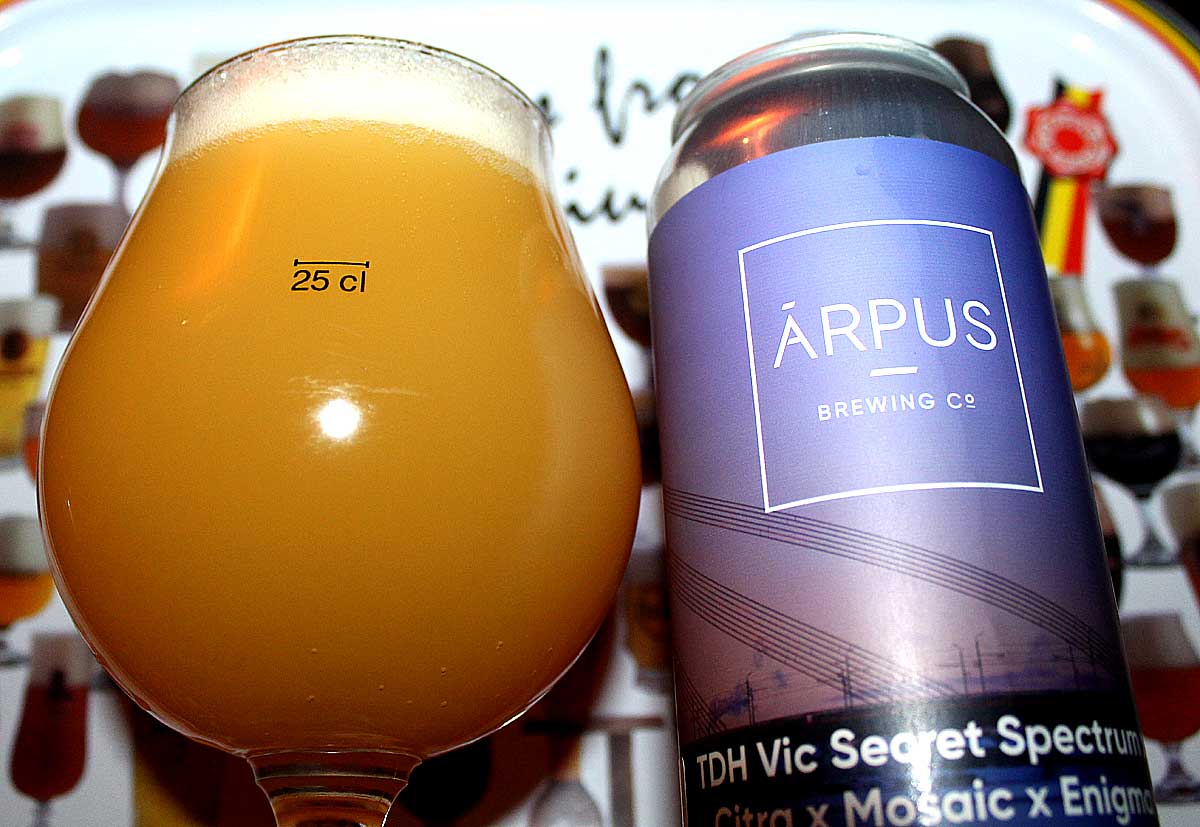 This is one of the most milky looking beers I ever had.
I wonder how they actually achieve that milkiness

This beer doesn't need it from the head. It initailly pours with a frothy head, but that head completely disappeared after 2 minutes.
But yes, it is not a Belgian beer after all.
This beer needs it's image towards that milkiness, which frankly is quite impressive

Nosing is a fruity explosion. Grapefruits, tangerine, oranges, citric all the way.
What a hoppy sensation folks!
OTOH, this beer is very sweet too, and makes that hop bitterness not really feeling that harsh bitter. That's exactly what I like.
Very comparable to Trappistbeer Westvleteren 12, which is a very hop bitter beer, but also sweet too. That perfect balance.
American west-coast DIPA's have that sweetness too. Essential really.
Tasting gave that dense mouth feeling. This beer is very thick on the tongue.
Every sip was a sensation of hoppiness, maltiness, and sweet counterbalance.
Due to the citric hops, it gave a dense sweet fruit juice similarity. Remarkable really, also because the look is hazy too.
But no, this is beer folks, and it contains that respectable 10 vol% of alcohol, which was easily noticed btw

Wauw, what more can I say than that this Latvian beer is such a great masterpiece.
But be aware that this beer has been discontinued. I'm actually quite lucky to have sampled it

Who is Where? / Re: San Sebastián

Quote from: Jay on January 30, 2023, 09:19:21 PMWell folks we're off on our travels again, it's Linda's birthday this coming Friday and so she's booked us a last minute 3 day break to San Sebastián and we leave this Saturday

It will quite the beer and foodie break in what is the gastronomic capital of the Basque region...a full report will follow

Nice ..... VERY nice Jay !!!!
There is that fair possibility that we will also pay San Sebastián a visit coming summer.
Normally, we always go to Thailand, but the airplane rates are so expensive these days. It's about €1.000 per person

If that stays like that, we are planning a trip from Bruges to Porto, and will pass alot of coastal cities during our car trip.
San Sebastian sure is a two days stay during that track

Cheers and have some cracking trip Jay & Linda

Quote from: John B on January 30, 2023, 03:40:31 PMDo you know what age the students are? I clicked on the link in your post but it seems to be a school with many different age groups. I don't know what the drinking age is in Belgium, but I'm assuming the students were probably at least old enough to drink their brew.

Hi John,
This expirement was done at the humaniora. Those are the most elderly students. We're speaking around 18 years old.
It's always such a nice learning when brewing is the key. There's alot of chemistry going on when brewing, hence this being a wonderful learning experience.
In Belgium it's not a problem when an 18 years old student savors a good beer .... with moderation (ofcourse)

Who is Where? / San Sebastián

Last post by Jay - January 30, 2023, 09:19:21 PM
Well folks we're off on our travels again, it's Linda's birthday this coming Friday and so she's booked us a last minute 3 day break to San Sebastián and we leave this Saturday

It will quite the beer and foodie break in what is the gastronomic capital of the Basque region...a full report will follow

Filip, thank you for pointing out the Green Cheek description of that beer. They are one of the more, shall we say, interesting breweries when it comes to beer descriptions. And even more important, they always put out a quality product too.

Do you know what age the students are? I clicked on the link in your post but it seems to be a school with many different age groups. I don't know what the drinking age is in Belgium, but I'm assuming the students were probably at least old enough to drink their brew. 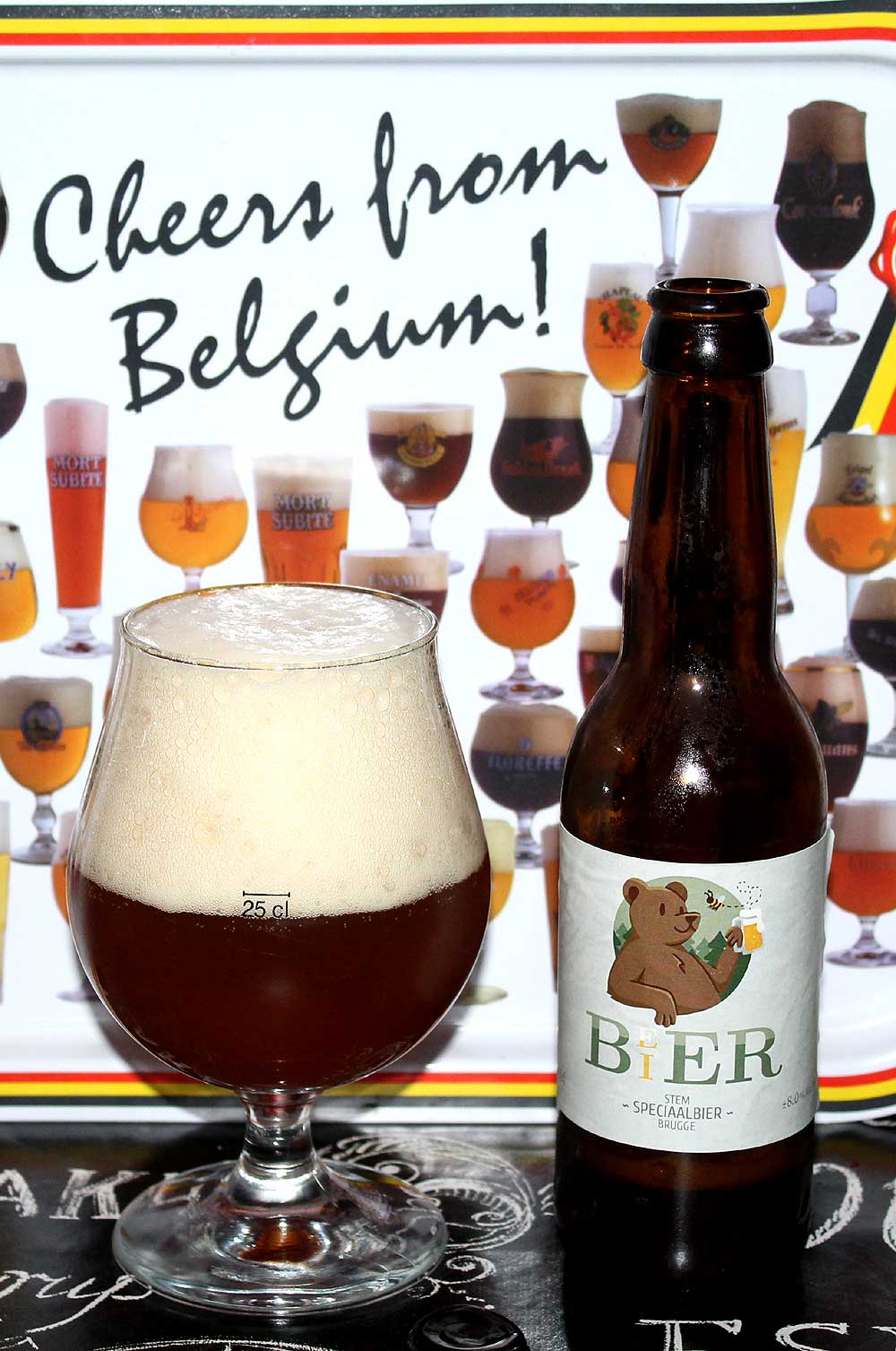 It carries a name that's hard to classify

because you simply can't write it down.
B(E)(I)ER
Referring to beer (Dutch for bear), and towards bier (beer) itself.
A bit complicated because beer is English for bier too. Reading in Dutch is the key here.
Another Bruges' bear beer, but this one is not a commercial beer at all. No problems with brewery De Halve Maan

This beer was brought home by my wife Katrien, who works at a school.
This actually is a school brewed beer. brewed by a teacher and his students!
A really nice initiative, and Katrien could take the last bottle straight back home.

Well, what a great beer they brewed there folks!
8 vol% strong! That's not a pussy beer.
Amber and hazy. Great head too. Congrats for that

It tastes quite fruity, but also nicely sweetish. Did they add honey?
What amazed me the most was that rich use of bitter hops.
This beer has such a hopbitter flavor. A bitterness that lingered for such a long time.
Wow, I must say that they did a splendid job there at the school (https://sask.be/)
You could easily sell it in the supermarket, and it will be sold out fast. Such a quality beer!

Quote from: John B on January 29, 2023, 07:57:17 PMIt called Brad Coast, and I have no idea what that means but Green Cheek is known to come up with some uh, interesting names for their beers. This one is probably an inside joke known only to them, unless I'm just clueless and the joke went right over my head. Which wouldn't be the first time.

Hi John,
First, thanks for sharing again some load of great quality US beers

I did some Googling and came upon their website: https://www.greencheekbeer.com/

Traditional Couch Chillin IPA w/ Mosaic, Citra, & Strata, 7% abv // Do you ever find yourself on the couch at midnight with a strong need to wash down the various delivered food items you have just consumed? Well, have we got the IPA for you! Not only does it wash it all down just right, but it also tastes great too! What's a Couch Chillin' IPA? Brad says that it's west coast in nature, hoppy enough to stand up to a whole bag of Doritos, and just bitter enough to cut through the fat on that beef stick. Tasting notes? Stickin' your nose into a bag of Tropical Skittles, orange soda, sour diesel & a few morning regerts.
7.0% ABV

I sure love this kind of American humour

A washing down IPA, but this one having delicious flavors. I'm all in for that treat John