Text only | Text with Images

Title: Café du Gaz - Brugge
Post by: Trappist on March 21, 2022, 10:52:26 AM
Hi,
With these Xtreme high petrol prices, we tend to not drive too far away from Bruges these days.
No problem at all, because there are enough addresses in the regio Bruges.
For example:

This is the ever first time we visit.

"Café Du gaz" referring to the former gas factory, and built in 1911
There is an outside patio, but yesterday it was too cold to sit there.
Going inside was the only option, but that was OK, because as such we acually could see how it looked alike.
This is a very cozy bar. Wooden tables, wooden floor, and a nice old brick wall. The ceiling is very high.
Yes, very nice to hanging around over there, and having some beers and food. 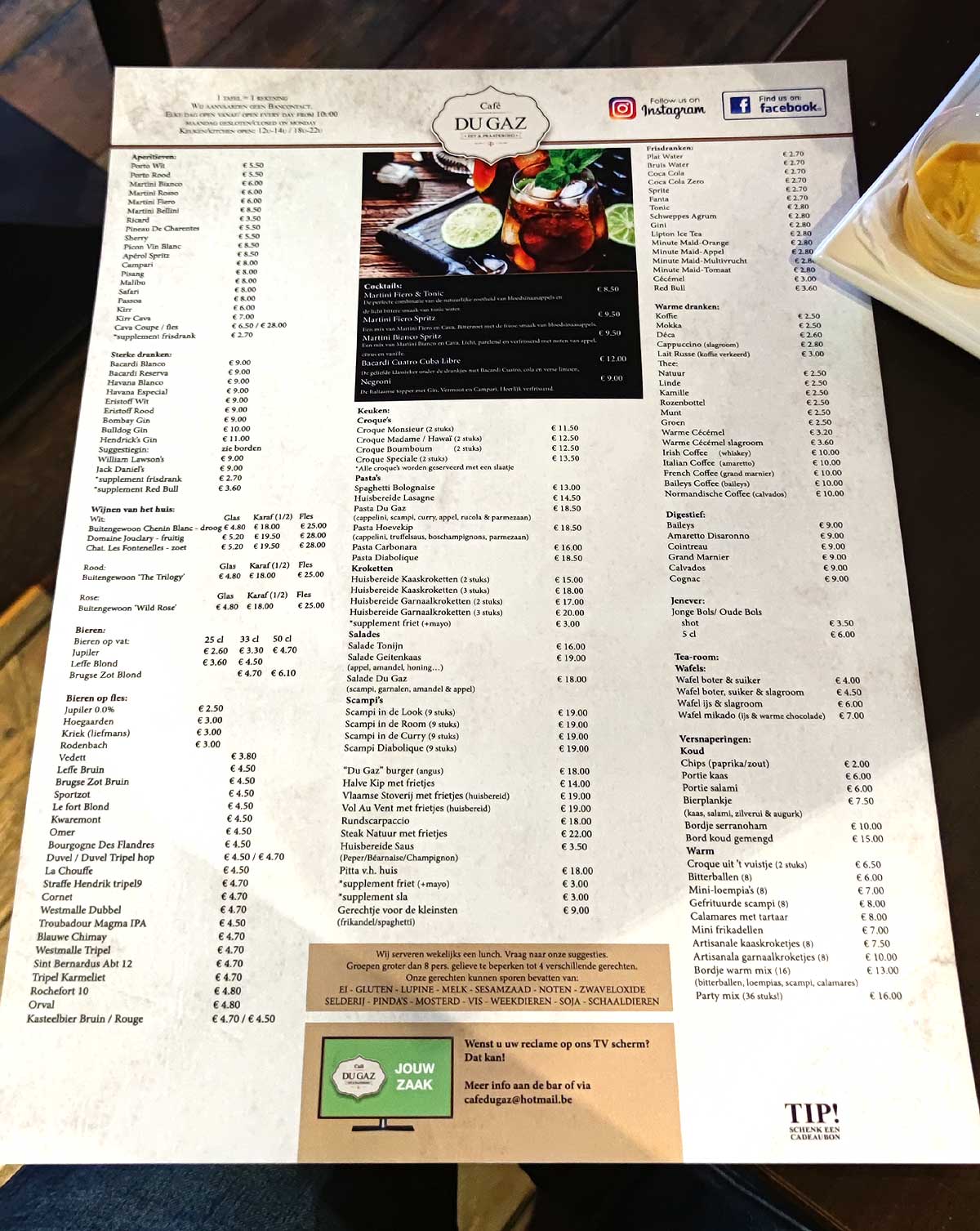 Their great menu, which shows about 30 beers.
Not that much, but they have Rochefort 10 at €4.80.
Alot of food there, so that can't go wrong  :fritemayo: 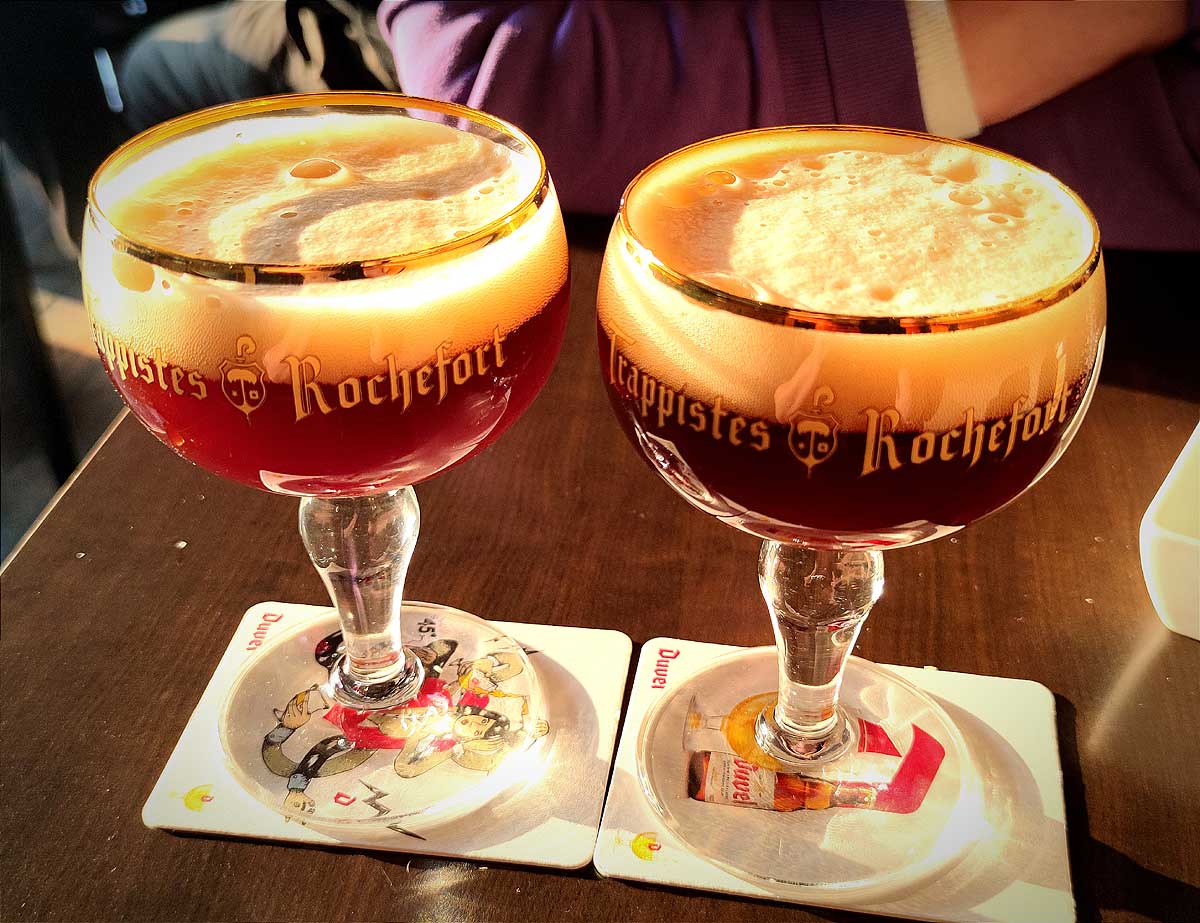 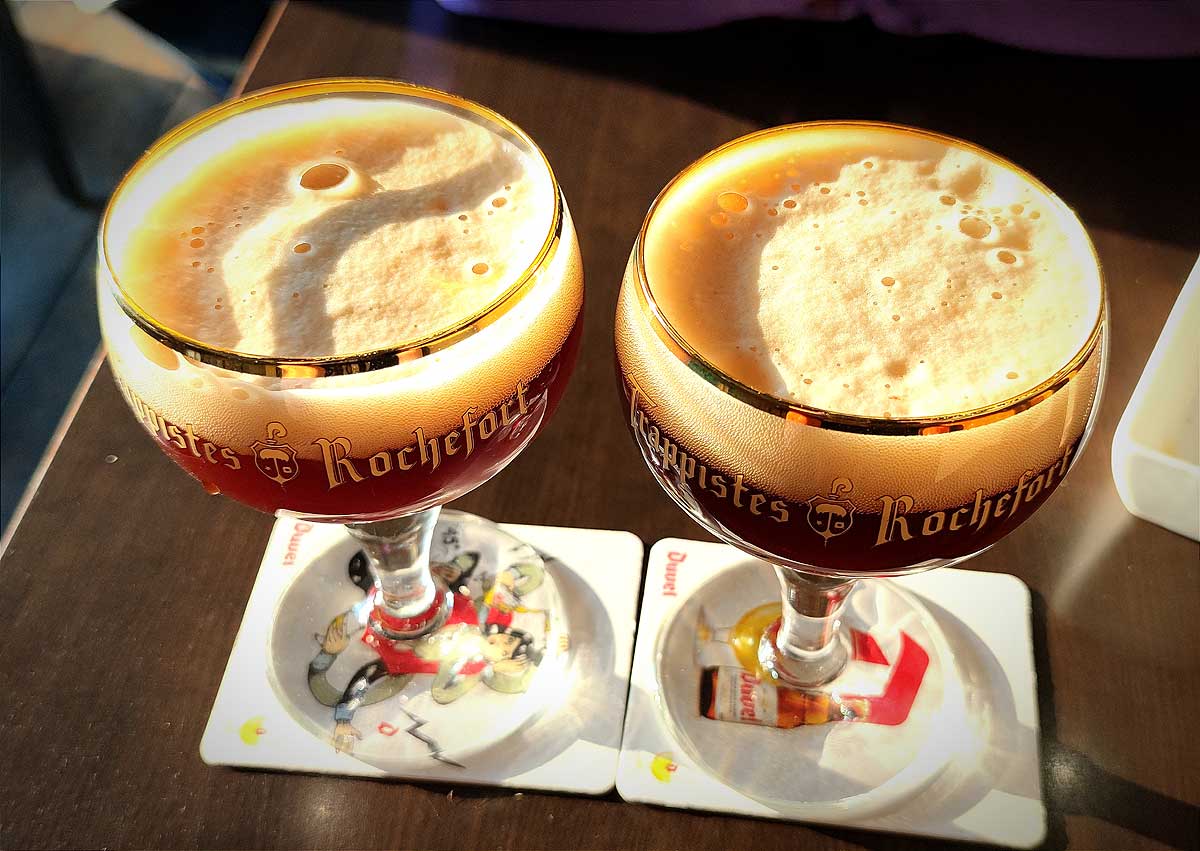 The beers were poured at the bar, and they gave the glass without the bottles, which frankly isn't really my thing  :chin:
Actually, I rather pour my beer by myself. That sure will give a much better head. 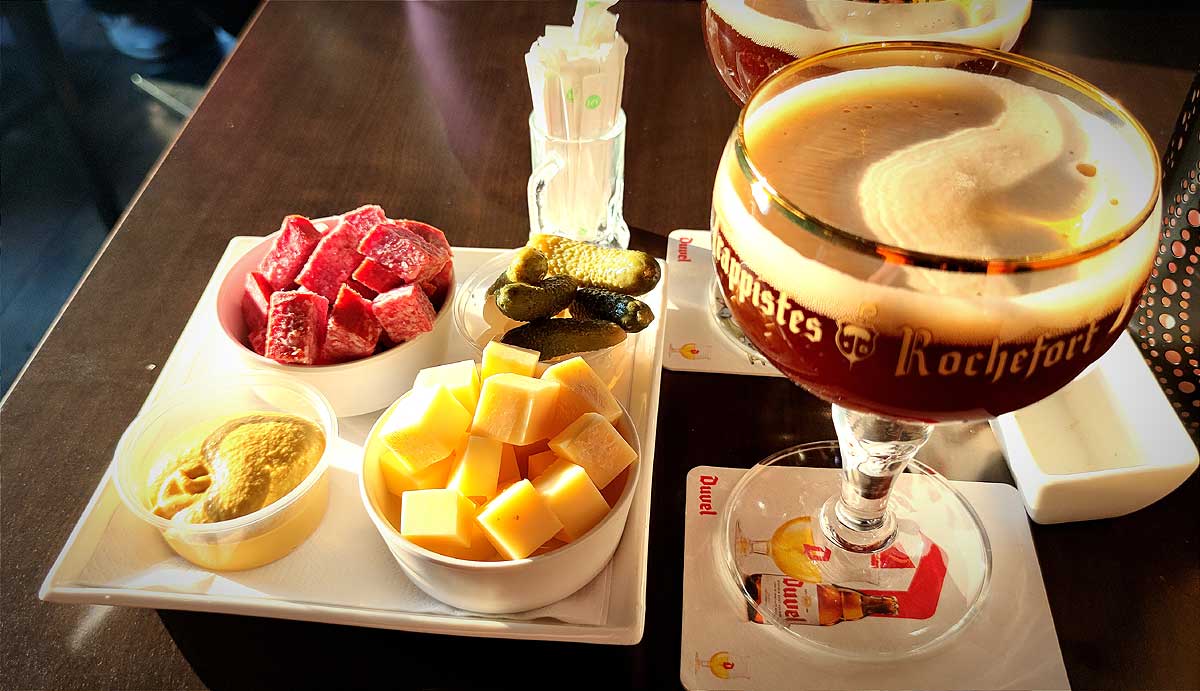 That small mixed platter makes it all that more complete. 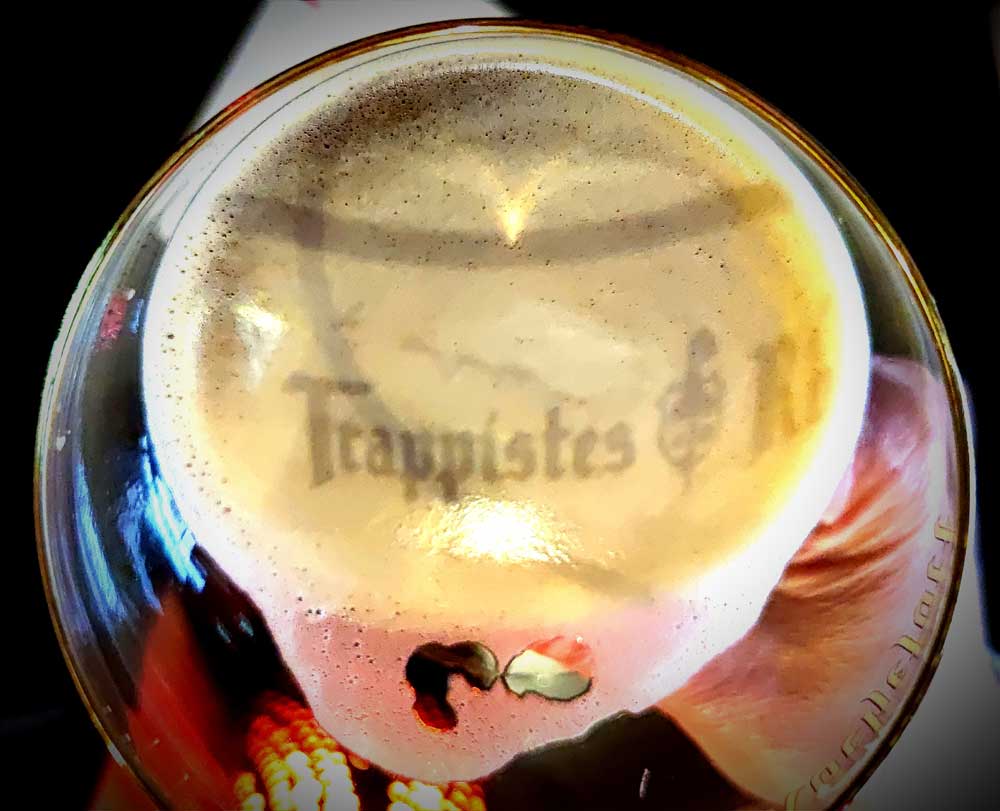 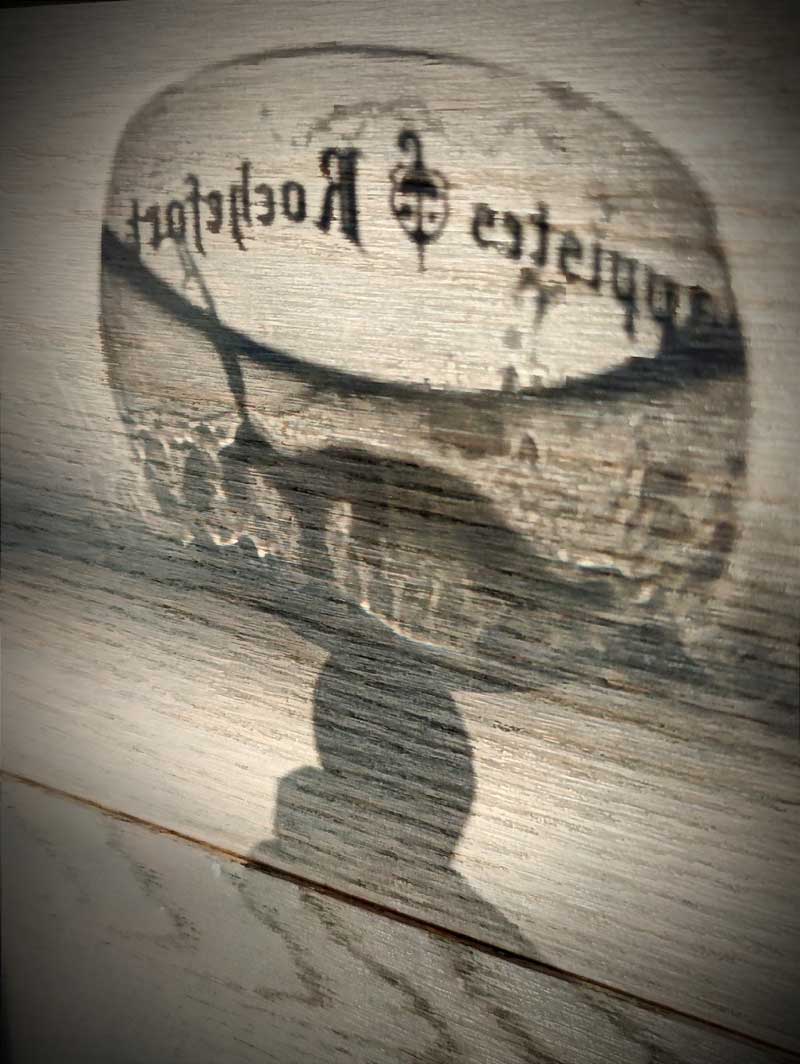 The sun was shining into the place, and into my eyes too.
But that sure gave some wonderful "sun playing" images :)

Time for food and another beer.... 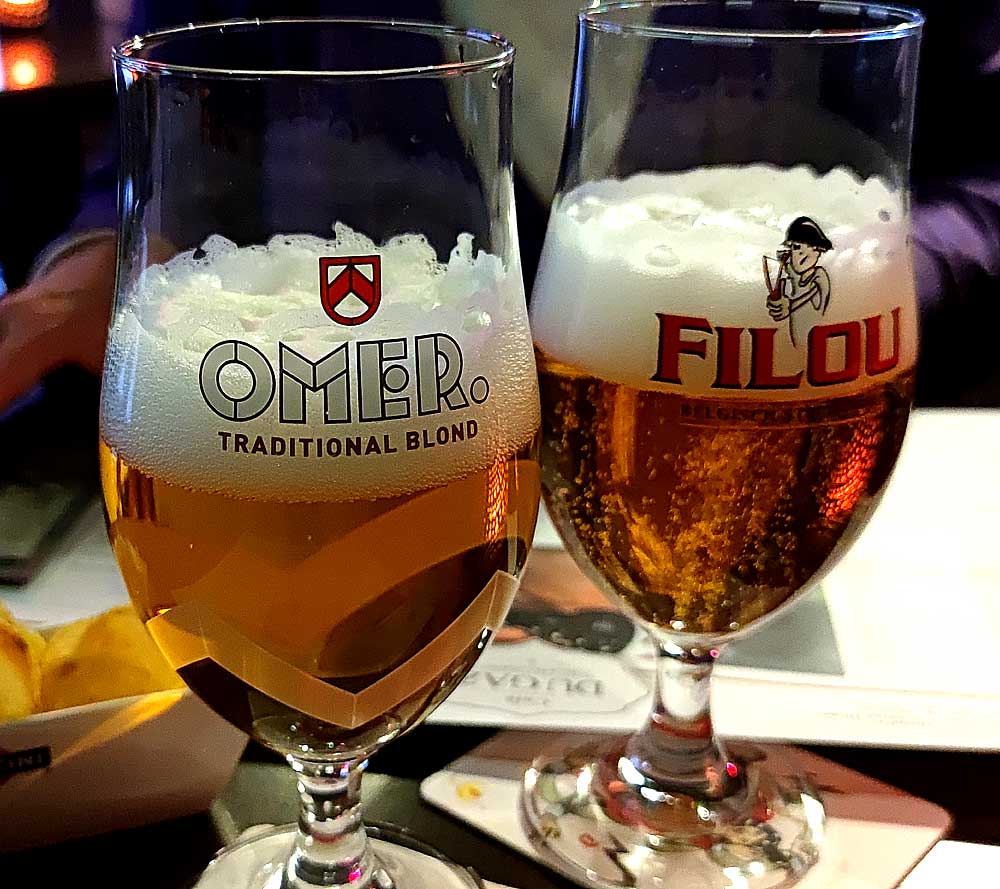 Filou was beer of the month! (not on the regular menu though)
We tried it, together with an Omer.
Both at €4.50.
I do know that both are from the same style, i.e. golden ale.
So, it was nice to do a side-by-side tasting.
Wow, how amazed and surprised we were that both beers are so close to eachother.
We did a blind tasting, and had alot of difficulties to point the correct beer.
Even with looking at them, they look nearly exactly the same. Same foam too, although the Filou had more carbonation going on.
But surprisingly, the Omer was more CO2 saturated. That could be felt on the tongue. Strange  :chin:
Flavor and aroma are VERY close! Maybe there is a bit more of a perfumy presence at the Omer, but that's really all I could make out of as difference.
Simply amazing !! 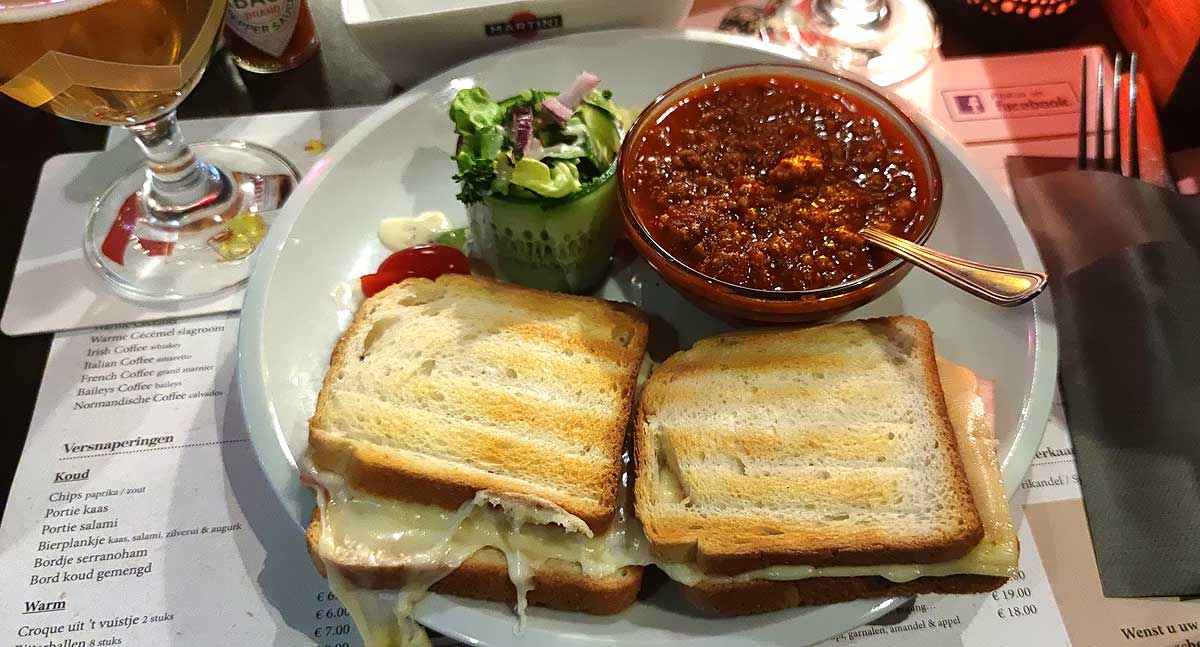 Folks, I can tell you that the food we ordered was DELICIOUS!
A Lasagna for Katrien, and a Croque Boem Boem (with spaghetti sauce) for me.
Our hunger was finished instantly :)

Thanks for your report. It looks like a cozy little place to visit. Nice that it's nearby you.

Speaking of that, and the high cost of petrol these days ...  You mentioned not doing as much driving now because of that. Same here, in fact if the price of gas (petrol) here wasn't so high I'd probably take a drive down towards San Diego to visit a couple of breweries and pick up some beer in person. But because that would cost me about $100 just in gasoline money, I'm staying home.

One nice thing though that I think I mentioned quite a while back when the pandemic was young, many breweries here have begun doing shipping direct to your home. So instead of spending a lot of money on gasoline just to get to a brewery, I've done a lot of ordering beer having it shipped to me. Typically the shipping cost is around $20. Sure, it's not as much fun as going directly to the breweries myself, but for now anyway it makes more sense.

Just wondering if there in Belgium more breweries have offered direct shipping these days? Is purchasing beer that way something that you would consider? Or is it that you're lucky enough to live near some excellent breweries, bars and beers stores that having beer shipped to you is not really worth it? Anyway, please excuse me for taking this thread somewhat off topic. Once again, thanks for another lovely report. I do enjoy them tremendously, please keep 'em coming.   :animated-belgium-flag-image-0

Quote from: John B on March 21, 2022, 11:24:30 PM
Or is it that you're lucky enough to live near some excellent breweries, bars and beers stores that having beer shipped to you is not really worth it? Anyway, please excuse me for taking this thread somewhat off topic.

Hi John,
Excuses? No No, on the contrary, I just LOVE those twists. That's just what the BBB wants to be. Actually, I'm very grateful you do these efforts :) THANKS !!
I never ship beer to my house, just because we can buy at very nearby supermarkets and beer warehouses/shops.
Here in the Bruges' region, and also at other parts of Belgium, we have more than enough beer bars too.
I feel very privileged that we have that luxury. And things are still quite affordable too. It sure is not an expensive occupation at all.
Shipping of beer here in Belgium is mainly done with export abroad. But ofcourse there are those local beer aficionados that want something special from a rather distant brewery, and those people will order online too. But that's really more kind of rarity.
The thing is that we Belgians are spoiled like little children, but the majority is not aware of that  ::)
Cheers,
Filip

Text only | Text with Images